Hello, all. This is Mark with a long-overdue message to you, the audience. Many things have occurred with this film that were, and still are, a surprise to me. We worked with some great actors, met many great local people that were extremely kind and helpful, and took a complete shot in the dark with making a feature film. Here we are, two years later, with a feature film that will soon be released to the public, and I am still reminding myself of how cool this is. Part of what's kept this alive for me has been the interest that everybody has taken in us and the movie. People just asking simple questions like "Are you still making that movie?" has made a big difference for me, in terms of motivation. Another part is that it has been a great experience making this thing, across-the-board. It's been a cool journey with, hopefully, some more road left to travel. I'd like to send many thanks to those of you that frequent the website, MySpace pages, and wherever else the film is getting some play, and for sharing your knowledge of The Road Home with others. My hope for the film is that everybody that sees it will get something out of it, in some way. So, before you bring out the rotten tomatoes and cabbage, give us and our movie a chance to entertain you, and I think you'll be pleased. I look forward to seeing you all at the premiere, whether I know you or not, and I hope you enjoy our film. My apologies for leaving you all high and dry for the past several months, but this movie's gettin' done, son.

December 4th, are you gonna be there? 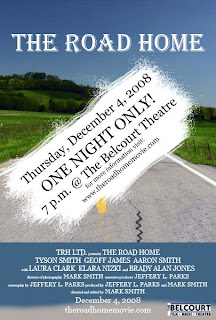 The wait is finally over! After more than year, The Road Home will finally be premiering for all to see. I would like to thank all who have been waiting for your patience, and look forward to seeing you at the Belcourt Theatre on Thursday December 4th. Those looking to get tickets early, you can do so on the Belcourt website here.
If you are coming and know someone who might be interested, please, invite them to come along. Personally speaking, a packed house would be the most satisfying way to hi-light this unbelievable process. Not mention, it would be a great way to show support for the unbelievable group of folks who gave up an entire summer of their lives to help a couple of first time feature filmmakers achieve the unlikely.
Run time will be around 90 minutes with the film beginning at 7 P.M. After the movie, the floor will be open to any questions you may have to any of the actors or filmmakers that are at the screening.
Once again, I look forward to seeing everyone there. If there are any questions please email me at jeff@jlpfilms.com for more information. Best wishes to all.
Jeffery L. Parks
Writer/Producer
Posted by The Road Home at 3:40 PM No comments: